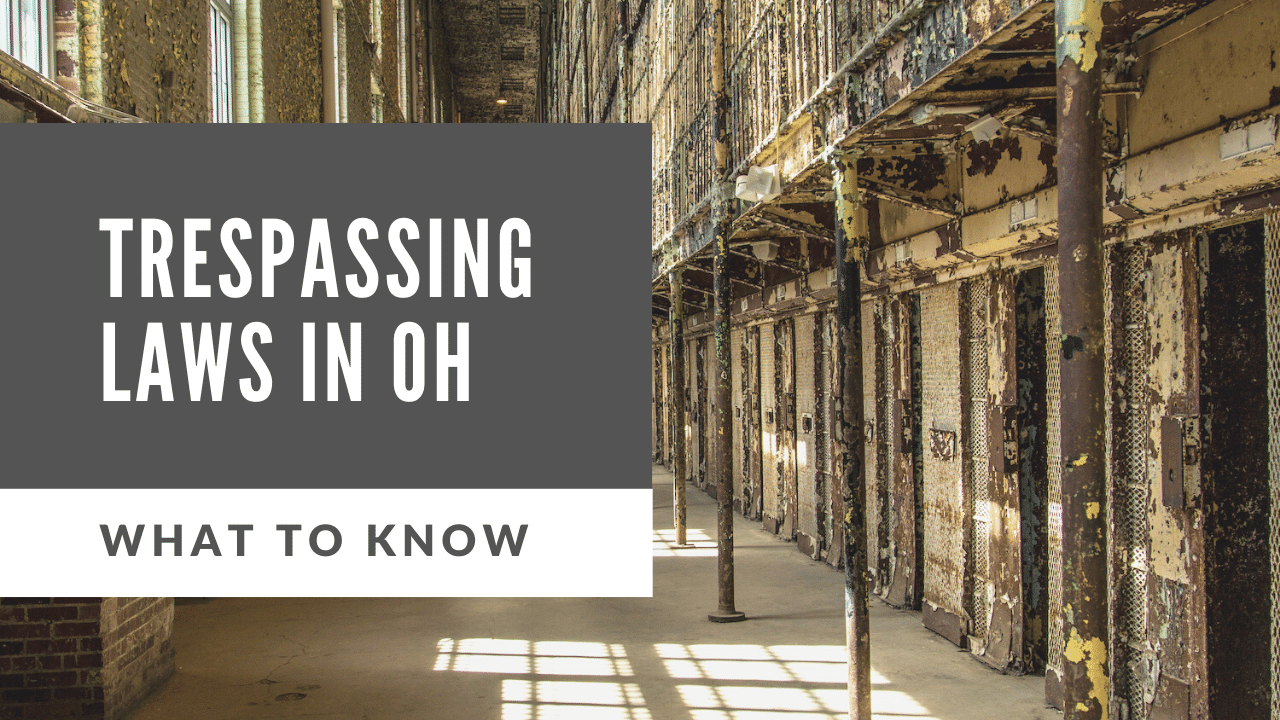 Those who are into urban exploration in the Ohio area should get comfortable with Ohio trespassing laws. Luckily, in the state of Ohio, the laws are easy to understand and are pretty cut and dry. For these cases, you should familiarize yourself with Ohio Revised Code Title XXIX. Crimes Procedure 2911.21.

Proper and responsible urban exploration comes with learning these trespassing laws. Why is this so important? Most of the time, unless a ton of time is put into getting permission to get into abandoned buildings, our pursuits and pastimes are at odds with the laws designed to protect private property and keep citizens safe from harm.

Interested in the best abandoned locations in the state of Ohio? Check out our top 10 locations here.

What happens if you get caught? When the blue lights of Ohio’s finest roll up on the property you’re exploring and ask you what you’re doing there, things could get tricky. Especially if you’re wearing all black and carrying urban exploration gear like a backpack, flashlight, and gloves, it’s going to be futile to attempt to deny intent.

After all, trespassing is exactly as defined in the Ohio trespassing laws, very first line: Knowingly enter or remain on the land or premises of another.

Luckily, if there are no signs present, you don’t have obvious intent, you didn’t steal anything, and you didn’t have to finagle your way through gates or doors to get into the urbex target, the most likely case is that you’ll just be asked to move along. However, once you ignore signs, or hop a fence to enter private property, you are subject to the full wrath of the Ohio trespassing laws.

Looking for more? Check out Caught Trespassing? Staying Out Of Trouble Urbexing

Digging in on Ohio trespassing laws and more

Knowing the difference between these three facets of Ohio trespassing laws is crucial. This specific has been covered roughly above. Knowingly entering someone else’s private property in the state of Ohio is generally equated with intent. This means that you will not be able to claim you just “wandered” into the area when you’re holding a bag full of gear specifically designed to explore that area. If you’re caught out in open property, this is most likely what they’ll charge you with.

Recklessly entering someone else’s private property is when you have trespassed and it is relatively obvious to any bystander that you were not supposed to be there. Picture a run-down building, or a storm drain system. We all know that it isn’t permitted to be there, but our craving for urban exploration keeps us going anyway.

If the area is well known to be off-limits, private property, or restricted to only certain people, and you are not one of those people, you could be considered recklessly trespassing.

This covers things such as sneaking backstage at some event, or into maintenance areas where you know you are not supposed to be. Another example is a park that has hours of “operation”. If it is publicly accessible during the day, but closed at night, and you enter after hours, this is considered recklessly trespassing. Don’t think about circumventing the system and entering during the day and staying past closing, either. This will still count as reckless trespassing.

Negligently failing to leave the property of another

And “negligently failed to leave” is what they’ll hit you with once you’ve ignored signs, fences, or even a verbal admonishment. The Ohio trespassing laws all consider these as valid and official commands to depart the property on behalf of the property owner.

An ignored “No Trespassing” or “Private Property” sign, a fence, even if partially damaged, are all every bit as valid as the security guard verbally telling you to leave.

The issue with the fence is the spirit in which it was erected. If it was designed to restrict access, but there is a hole cut into it by other trespassers, that fence is still a valid notification. Yes, even if you never touched the fence, and you went through the wide gap, its original purpose is clear and you are in violation. Broken fences, dirty signs, these all count as “being asked to leave” or not enter. Your continued presence will constitute a refusal to do so. Ignoring these notifications in the state of Ohio could easily land you in hot legal water with charges of criminal trespassing. Per Ohio law: Whoever violates this section is guilty of criminal trespass, a misdemeanor of the fourth degree.

Before you think you have the perfect defense against the charges, an excuse or reason for you being on private property that you’re going to hope everyone believes, be aware that right in the procedurals for the Ohio trespass laws, the wording is explicitly clear about what does NOT constitute a defense against criminal trespassing.

“I thought it was a public area”

There is no defense by saying you believed it was public lands and open for everyone. The park is public lands, the municipal storm drains are not. Nor can you claim that since you are a taxpaying citizen of Ohio, that public lands indeed belong to you and therefore you can’t be charged with trespassing on your own public lands.

In fact, right in the criminal code they address this, it is not a valid defense: It is no defense to a charge under this section that the land or premises involved were owned, controlled, or in the custody of a public agency.

“But the owner technically gave permission”

Another popular attempt at negating trespassing charges is thwarted right away in the criminal code as well. You are still guilty of trespassing if you gained permission to be on the property through fraud or deceit.

Bluffing your way past an employee, using fake IDs, cos-playing as a maintenance worker… any of these can still get you busted even if it initially works and you believe you got away with it. That’s just how Ohio trespassing laws work.

What to do if you get caught trespassing in Ohio

If you are caught, charged, and found guilty, you will be slapped with the criminal conviction of a fourth-degree misdemeanor. There are five categories for misdemeanors in the state of Ohio. A minor misdemeanor is something as innocent as a traffic violation.

Ohio trespassing laws punish you with a fourth-degree misdemeanor which is the same level offense as public indecency or the consumption of alcohol in a motor vehicle. That’s not good news.

Ohio has a maximum penalty for each rank of a misdemeanor. Being found guilty of criminal trespassing could land you in jail for no more than 30 days, and a fine of no more than $250.

In many (read: most) cases, the jail time is commuted to the fine, or in some cases community service. You will rarely find yourself inside a jail cell due to simple trespassing unless you decided to take some souvenirs. There are a few caveats to Ohio’s trespassing laws specific to certain circumstances that the savvy urbex adventurer should remain keenly aware of.  If you are exploring an isolated location and you use your ATV or snowmobile to get to the spot, you will be subjected to a doubling of the fine.

It appears this provision in the Ohio trespassing laws was originally implemented to keep off-roaders from tearing up farmer’s fields with ruts, but they will hang this one on you in any case.  The third strike against you trespassing with an ATV, they’ll pull your registration for 60+ days.

Another provision that could affect your urbex activities is the definition of a “place of public amusement”.  Originally intended to address people that charge onto the field of play at sporting events or theaters, the loose term “public amusement” could conceivably apply to many popular urbex sites so be wary.

Criminal Trespass at a place of Public Amusement gets bumped up to a first-degree misdemeanor which is the same penalty for DUI, assault, or “Aggravated Trespassing” which is where you are trespassing with intent to cause bodily harm!

Aggravated trespassing is not generally an urbex concern until you realize the conviction stands the same as the “public amusement” clause and carries 180 days in jail, a $1,000 fine, and between 30 to 120 days supervised community service.

Our Final Thoughts on Ohio Urbex

The Ohio trespassing laws are clear and concise and seem to close any loopholes that might exist for urban explorers looking to do some exploration in the state. However, where there is a will, there is a way. Sure, you can risk it. That’s what most of us do anyway.

But there are always other ways to gain permission. Get creative, and you’ll soon be doing some of the best urban exploring Ohio has to offer. For more about obtaining permission to explore abandoned places, check out our guide Explore Abandoned Buildings: How To Get Permission.